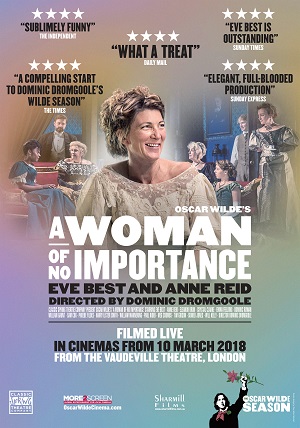 A Woman Of No Importance

Olivier award-winner Eve Best (A MOON FOR THE MISBEGOTTEN and HEDDA GABLER) and BAFTA-nominated actress Anne Reid (LAST TANGO IN HALIFAX) star in this new classically staged production of Oscar Wilde’s comedy directed by Dominic Dromgoole, former Artistic Director of Shakespeare’s Globe. The first play from the Classic Spring Theatre Company’s Oscar Wilde Season, A WOMAN OF NO IMPORTANCE will be broadcast live to cinemas from the Vaudeville Theatre in London’s West End.

‘One can survive everything nowadays, except death, and live down anything except a good reputation.’ Oscar Wilde