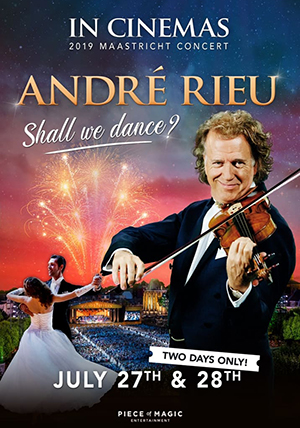 Andre Rieu Maastricht 2019: Shall We Dance

André Rieu’s annual hometown Maastricht concerts attract fans from all corners of the globe. The medieval town square is transformed into a spectacular backdrop for unforgettable concerts filled with humour, fun and emotion for all ages – and, of course, magnificent music. This year’s theme is a dedication to the waltz.

The majestic waltz has been such an inspiration to André Rieu throughout his career that its three-four beat has become, in many ways, the rhythm of his life. From an international football match at Amsterdam stadium in 1995, when André filled the half-time interval with a performance of a classic waltz, to his Maastricht concerts of 2011, where André premiered ‘And The Waltz Goes On’, composed by Oscar-winning actor Sir Anthony Hopkins, this popular dance has often taken centre stage. André has composed many waltzes and since 1987, he and his Johann Strauss Orchestra have been delighting audiences all over the world with their magnificent renditions of classic waltzes.

Audiences are sure to be swept off their feet by this magical concert on the big screen in the comfort of their local cinema as they join the King of the Waltz, his Johann Strauss Orchestra, world class sopranos, Platin Tenors and special guests for an incomparable cinematic experience, including exclusive behind-the-scenes content, interviews with André and as always, some delicious surprises. Shall we dance?