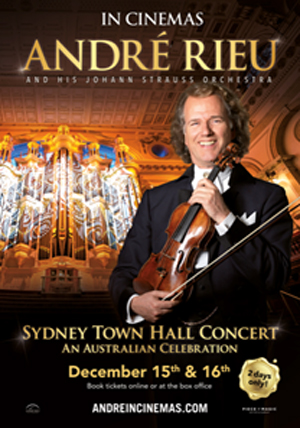 The world’s biggest name in special event cinema - André Rieu – will be back in cinemas around Australia with a brand-new major production on December 15 and 16.

‘The King of Waltz’ will film a one-off concert at Sydney’s iconic Town Hall in November, during his Australian tour, which will screen in cinemas to his millions of fans across the world in December (Australia & NZ) and January (Europe & North America). André Rieu and his Johann Strauss Orchestra will perform this intimate concert which audiences Down Under will be the first in the world to enjoy on the big screen!

Join the Maestro for a magical concert experience featuring his world class sopranos and The Platin Tenors with show tunes, classical music favourites, dance and plenty of surprises and festive fun.
With all the exclusive extras for cinema audiences including backstage access, interviews with André and his special guests and much, much more. This is the first full production from distributor Piece of Magic Entertainment. It is important to note that André Rieu’s Sydney Town Hall Concert – An Australian Celebration will be a different concert from André Rieu’s Australian tour show.