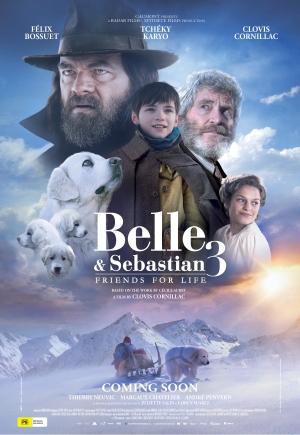 Belle and Sebastian 3: Friends for Life

The Belle & Sebastian adventure began in 2013 when a six-year-old and his dog sought to foil a Nazi attempt to capture French resistance fighters. As the name suggests, such an incredible friendship between boy and beast continues in this third instalment of the film series, Belle & Sebastian, Friends for Life.

Picking up where its predecessor left off, Sebastian (Félix Bossuet) is now aged 12, and has decided not to follow his father and Angelina to Canada, choosing instead to remain in the French Alps with César (Tchéky Karyo) to watch over Belle who’s now become mother to three beautiful pups.

When a stranger arrives claiming to be Belle’s rightful owner, Sebastian finds himself in a position where he must protect his best friend and her little ones.

The second feature by César award-winning actor-turned-director Clovis Cornillac (Blind Date, AF FFF2016), Belle &Sebastian, Friends for Life comes from the pen of Juliette Sales and Fabien Suarez who wrote the other two films in the series. It also rekindles the magic of original stars, Bossuet and Karyo, as Sebastian and César respectively.