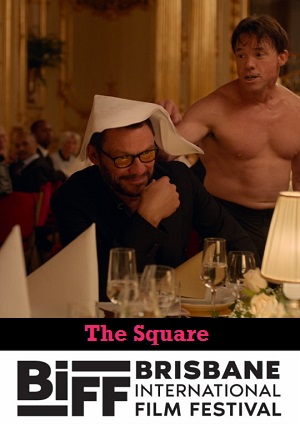 Christian (Claes Bang) likes to think he’s a good and ethical person. He’s a devoted dad-of-two, a dyed-in-the-wool liberal, a charitable giver, and he even drives an electric car. And as curator of Stockholm’s palatial art museum, his next show is The Square, a wonderfully positive installation that invites passers-by to do good deeds, reminding them of their interconnectedness, their social conscience, their very humanity.

But some days, it’s hard to live up to your own ideals. After stepping in to help a stranger, Christian finds he’s been mugged, his wallet and phone have been stolen – and his calm and considered altruism is gone in an instant, replaced by a raging need to track down the thief at all costs.

Meanwhile, at the museum, a ruthlessly gung-ho public relations agency has gone a little too far to build some buzz for The Square, sparking a public outcry and adding to Christian’s woes.