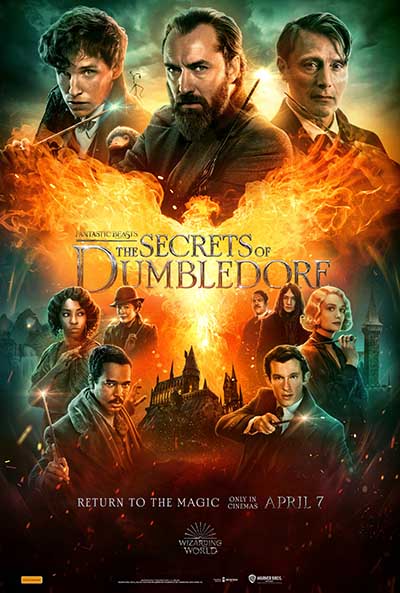 Fantastic Beasts: The Secrets of Dumbledore

Professor Albus Dumbledore knows the powerful Dark wizard Gellert Grindelwald is moving to seize control of the wizarding world. Unable to stop him alone, he entrusts Magizoologist Newt Scamander to lead an intrepid team of wizards, witches and one brave Muggle baker on a dangerous mission, where they encounter old and new beasts and clash with Grindelwald’s growing legion of followers. But with the stakes so high, how long can Dumbledore remain on the sidelines?

Many of the much-loved characters from the first two Fantastic Beasts films return, such as Eddie Redmayne as Newt Scamander and Jude Law as Albus Dumbledore along with Ezra Miller (Credence/Aurelius Dumbledore), Alison Sudol (Queenie Goldstein), Dan Fogler (Jacob Kowalski) and Katherine Waterston (Tina Goldstein). Comedian and actor Jessica Williams, who had a brief appearance in Fantastic Beasts: The Crimes of Grindelwald, will return as Ilvermorny professor Eulalie 'Lally' Hicks, while Mads Mikkelsen will debut as Gellert Grindelwald.