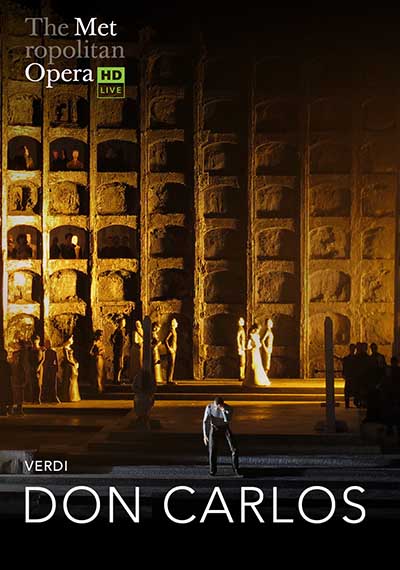 ACT I
France, c. 1560. Against the wishes of the Spanish King Philip II, his son and heir, Don Carlo, has traveled incognito to Fontainebleau, where negotiations are under way for a peace treaty between Spain and France. He has seen his intended bride Elisabeth, daughter of the French king, and fallen in love with her on sight. When he meets Elisabeth and her page, who have been hunting and become lost in the forest, Carlo offers his protection without revealing his identity. Elisabeth questions him about her future husband, apprehensive over her marriage to a stranger. Carlo gives her a miniature portrait of himself, and she realizes that he is the prince. It is clear to them both that their feelings of love are mutual. Their happiness ends with news that the treaty arrangements have been altered and Elisabeth is to marry King Philip, Carlo’s father. Elisabeth reluctantly accepts. While all around them celebrate the end of the war, Elisabeth and Carlo are devastated.


ACT II
Carlo seeks peace at the monastery of St. Just in Spain, where he prays at the tomb of his grandfather, Emperor Charles V. He is confronted by a monk who seems to be the emperor’s ghost. His friend Rodrigo, the Marquis of Posa, arrives to remind Carlo of his commitment to the cause of the Flemish people who are oppressed by Spanish rule. Both pledge themselves to the cause of liberty and swear eternal friendship.

In a garden outside the monastery, Princess Eboli entertains the other ladies of the court with a song. Elisabeth—now queen—enters, followed by Posa, who hands her a secret letter from Carlo asking for a meeting. When he is admitted, Carlo asks the queen to obtain Philip’s permission for him to go to Flanders, then suddenly declares his continuing love. Elisabeth rejects him and Carlo rushes off. The king enters and, finding the queen unattended, banishes the Countess of Aremberg, who should have been present.

Left alone with the king, Posa challenges Philip to end his oppression of the Flemish people. Philip refuses but is impressed by Posa’s courage. He warns him to beware of the Inquisition and tells Posa about his suspicions of his wife and Carlo, asking Posa to watch them. Posa accepts the assignment, knowing that being in the king’s confidence will help him in the future.


ACT III
Carlo has received a letter asking him to a secret meeting at midnight in the queen’s gardens in Madrid. He thinks the meeting is with Elisabeth, but it is Princess Eboli who appears. She is in love with him. When Carlo discovers her identity and rejects her advances, Eboli realizes where the prince’s true feelings lie and swears to expose him. Posa arrives in time to overhear Eboli and threatens to kill her but is stopped by Carlo. Eboli leaves. Posa persuades Carlo he is now in danger and Carlo hands over some secret papers to him for safekeeping.

At a public burning of heretics in front of Madrid’s Basilica of Our Lady of Atocha, Carlo leads a group of Flemish deputies to Philip. The king rejects their pleas for freedom. When he also dismisses Carlo’s own request to rule Flanders, the prince draws his sword on his father. He is disarmed by Posa and arrested. In thanks, Philip makes Posa a duke. As a group of heretics is led to the stake, a celestial voice welcomes their souls into heaven.


ACT IV
In his study at night, the king reflects on his life with a wife who doesn’t love him. He consults with the old and blind Grand Inquisitor, who consents to the death sentence for Carlo: as God sacrificed his son to save mankind so Philip must stifle his love for his son for the sake of the faith. The Inquisitor also demands that Posa be handed over to him. As he leaves, Philip wonders if the throne must always yield to the altar. Elisabeth enters, having discovered that her jewel case has been stolen. Eboli, who knows that Elisabeth keeps a portrait of Carlo in it, had taken the box and given it to the king. Philip now shows the box to Elisabeth, takes out the portrait, and accuses her of adultery. Elisabeth collapses and the king calls for help. Eboli and Posa rush in, he to express amazement that a king who rules half the world cannot govern his own emotions, she to feel remorse at what her jealousy has brought about. Alone with Elisabeth, Eboli confesses that she not only falsely accused her but that she has been the king’s mistress. Elisabeth orders her from the court. Eboli laments her fatal beauty and swears to spend her final day in Spain trying to save Carlo.

Posa visits Carlo in prison to tell him that he has used the secret papers to take upon himself the blame for the Flemish rebellion. He is now a marked man, so Carlo must take up the cause of liberty for Flanders. Posa is shot by agents of the Inquisition. As he dies he tells Carlo that Elisabeth will meet him at the monastery of St. Just and declares he is happy to have sacrificed his life for a man who will become Spain’s savior.


ACT V
Elisabeth has come to the monastery, wanting only her own death. When Carlo appears, she encourages him to continue Posa’s quest for freedom in Flanders and they hope for happiness in the next world. As they say goodbye, Philip and the Grand Inquisitor arrive. As the agents of the Inquisition move in on Carlo, the Emperor Charles V materializes out of the darkness to insist that suffering is unavoidable and ceases only in heaven.