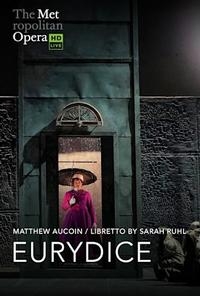 ACT I
Orpheus and Eurydice, young and in love, are on a beach. Eurydice is frustrated that Orpheus’s mind always seems to be elsewhere. But Orpheus surprises her; he playfully ties a string around her finger to remind her of their love, and she realizes (a little late) that he’s tied it around her ring finger, and that it’s a proposal. She says yes.
In the Underworld, Eurydice’s father writes her a letter, offering fatherly advice for her wedding day. He laments that he doesn’t know how to get his letters to her.
At their wedding, Orpheus and Eurydice dance. Eurydice says she’s feeling warm, and steps outside to find a drink of water.
When she is alone outside, Eurydice realizes how much she misses her deceased father and says that she’d always thought there would be “more interesting people” at her wedding. At that moment, a mysterious, “interesting” man appears. He claims to have a penthouse apartment.
At his apartment, the Interesting Man gives Eurydice Champagne and puts on terrible mood music. He does not give her the letter from her father. Eurydice realizes the situation that she’s in and turns to leave. The Interesting Man reveals the letter. Eurydice tries to grab it and run away, but she trips. She falls down hundreds of stairs, into the Underworld, to her death.

ACT II
In the Underworld, three Stones—Little Stone, Big Stone, and Loud Stone—the obnoxious bureaucratic guardians of the land of the dead, explain that Eurydice has died, and that, as a dead person, she will lose her memory and all power of language.
Eurydice arrives in the Underworld in an elevator. Inside the elevator, it rains on Eurydice. She loses her memory.
When she steps out of the elevator, her father greets her. Eurydice has no idea who he is. Her father tries to explain what has happened to her.
In the world above, Orpheus mourns Eurydice’s death. He writes her a letter but does not know how to get it to her.
In the Underworld, the father builds a room out of string for Eurydice. A letter falls from the sky. The father reads it and tells Eurydice it’s from Orpheus. The name “Orpheus” triggers something in Eurydice, and she begins to remember who she is. She finally recognizes her father.
Orpheus slowly lowers the collected works of Shakespeare into the Underworld on a string. The father reads to Eurydice from King Lear. Eurydice begins to learn language again, word by word.
Orpheus resolves to find a way to get to the Underworld and bring Eurydice back.
In the Underworld, the Stones hear Orpheus singing wordlessly as he approaches the gates. His singing begins to rouse the spirits of the dead. Distressed, the Stones call their boss, Hades, who was also the Interesting Man.

ACT III
Orpheus sings gorgeously at the gates of the Underworld. Hades appears and dismissively informs him of the rules for bringing Eurydice back to the world above. She can follow him, but he must not look back to make sure she is there.
Eurydice is torn between following Orpheus and staying with her father. Her father insists that she go after Orpheus and live a full life.
When she sees Orpheus up ahead, Eurydice is afraid. She is convinced that it’s not really him. She follows but eventually rushes toward him and calls his name. Orpheus turns around, startled. The lovers are slowly, helplessly pulled apart.
The father is desolate now that Eurydice is gone. In despair, he decides to dip himself in the river of forgetfulness and obliterate his memory. He quietly speaks the directions to his childhood home and lowers himself into the water.
Eurydice returns to the Underworld and finds, to her horror, that her father has dipped himself in the river of forgetfulness and obliterated his memory. Hades reappears to claim Eurydice as his bride. She coyly asks for a moment to prepare herself.
She finds a pen in her father’s coat pocket and writes a letter to Orpheus, which contains instructions for his future wife on how to take care of him. She dips herself in the river of forgetfulness.
The elevator descends once again. In it is Orpheus. He sees Eurydice lying on the ground. He recognizes her and is happy. But the elevator rains on Orpheus, obliterating his memory. He steps out of the elevator. He finds the letter Eurydice wrote to him. He does not know how to read it.