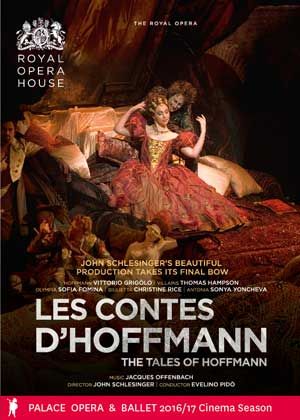 Academy Award©-winning director John Schlesinger's lavish production of Offenbach’s fantastical opera is a favourite with ROH audiences, bringing alive a 19th-century world of romance, comedy, mystery and menace. Charismatic tenor Vittorio Grigolo is Hoffmann – compelled to tell the story of his lovers who, he believes, have all been stolen by a succession of arch villains. The many showpiece numbers are perfect vehicles for this superb cast. Captured live at Covent Garden London, 15 Nov, 2016.