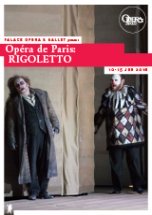 NEW PRODUCTION Verdi wrote in 1855 that Rigoletto, based on a play by Victor Hugo, was his ‘best opera’.